Minou Iranpour is one of the guest curators for the 8th edition of Limited Access Festival. Being born and living in Isfahan, she put together a special program for this edition, including sound/video pieces made by 25 artists from Isfahan. Besides focusing on less represented, forgotten or even neglected works, Iranpour has tried her best to bring voices from various generations with various concerns. In The Multiple Access screening program, there are videos with social themes, urban and environmental approaches along with intimate documentaries dealing with individual psychological or even abstract elements. The aim of curating the program and juxtaposing the diverse collection of works both from formal and thematic aspects is to present a study on impacts of the living and producing in certain geography on artists’ practice who shared a locality through three decades. 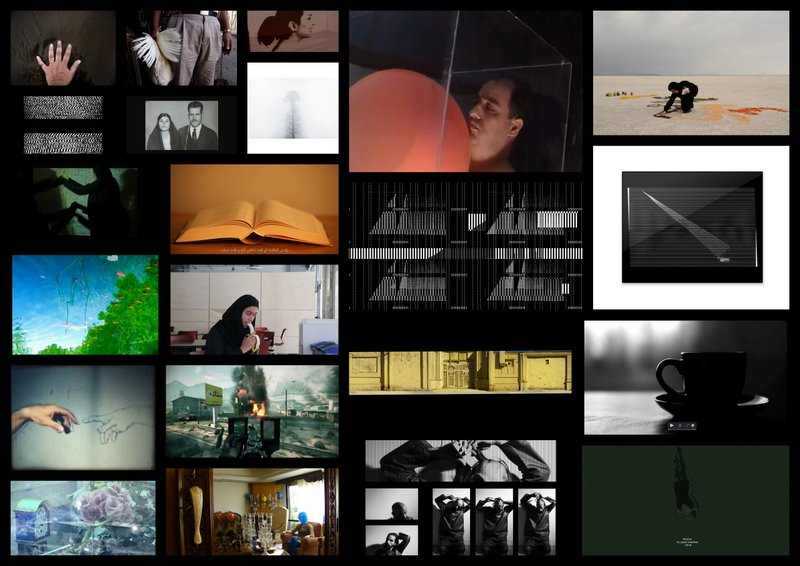 This video is perhaps the story of the ones that are trapped behind the locked doors of prejudices and superstitions.
Instead of resisting and fighting back to remove the obstacles, they sacrifice the lives of other species by shedding their blood so that they can overcome the failures; the lives of these species are in fact the essence of life.
In this pseudo-documentary, one bird out of many has volunteered to be a sacrifice and a medium between the woman and her merciless illusionary creator. To shout the agonizing outcry blocking its throat and to have its wings to be the covered in blood and may all the un-ended locks to be broken. Yet, hopeful to an illusion of the future, only by appealing to something that has taken the place  of reason! Time and discipline are two conventional concepts that humans have applied to the outer world so they can control and arrange their existence. Then the language emerged which was followed by established social and communication order. All these systematic relations are derived from their thinking process.
In 1994, I shoot this video is made with a Super 8mm camera frame by frame. The pictures are painted in traditional Glass Painting technique. I began filming this video around a lovely pond in Eram garden with no specific intention. When I watched it some years later, the initial concept of “Dreamy” came to my mind. I turned my idea into this video in 2011. Unfortunately, I found out the pond has dried out when I went back there to complete my video. Roses, fennel, thyme, oregano, mint, safflower, orange spring, red pepper, black seed, turmeric, cinnamon and rosehips all rise and go away with the wind. Only the sweet smell stays with us and nothing more … like the scent of a human body passing by you. Hegemony confines you on a one-way road, with no turning back. Your dreams and words will not be heard, seen nor read. What consumes us, consciously or unconsciously, sometimes fills our space so much that there is no room for breathing; things like love or any other daily activity. In the process, of course, we understand our relationship with the other and the environment better than ever. This video is a visual embodiment of such a process.

This is Tehran | Reza Rezvani Fireworks in Tehran challenge the effects of mass media on the memory of the recipient. A computer game named “BattleField 3 inspired this video” (Oct. 2011) which is about the US attacking Iran. Its soundtrack is from the fireworks of New Year’s Eve in London 2012, and the sound of Big Ben; the same initial sound of Iran’s 6 am Today in History program and the UK’s 10 am radio news.

All That Is Solid Melts into Air | Parisa Fahami “We” means fear, obedience, and subordination. It means an impulsive crowd who follows a singular leader. “I” on the other hand, means giving an opportunity for creativity, individuality, and democracy. The fundamental narcissism by which the human subject creates fantasy images of both himself and his ideal object of desire, according to Lacan. The imaginary order is closely tied to Lacan’s theorization of the mirror stage. This image in the mirror is the image of coherence—of what makes the world and our place as complete subjects in it make sense. It becomes a process of identification of internal self with that external image. In the summer of 2014, an exhibition titled “Square Kufic: 13 + 100” curated in “Arte” gallery in Isfahan. A Video art made base on Iranian inscription and calligraphy, played on a semi-transparent screen in the exhibition. The passage of the visitors in the front and back of the screen recorded by a camera and made another video called “First Visit”. This video played in the following exhibition in the winter of 2014 in “Apadana” gallery. Visitors could see the audience that moving around the previous video, while the other camera recorded their reaction. This resulting Video art named “Second Visit”. This artwork is aimed to encounter the audience to the video art phenomenon where audiences are part of the artwork: “A narrative about the transformation of the subject as an object in the artwork”. These images sometimes involve the action and Interaction of audiences and sometimes passive encounter of them as far as their image or shadow toward to become as Things (Reification) in the artwork. Emilio in a long gown
enters to his school’s cafe.
Meanwhile his looking around anxious,
tries to take out
a big object from his pocket! The video presents a panoramic prospect. It is the result of connecting the images of the walls with a yellow stain on them in Isfahan next to each other. The most memorable event of all was a series of ten lectures and poetry readings held between 10 and 19 October 1977. The “Ten Nights” (dah šab), as they came to be known, took place at the German Cultural Institute on Pahlavi Avenue, the premises of the Goethe Institute having been deemed too small for the expected audience. They spoke of censorship, freedom of thought, the responsibilities of intellectuals, inequality, and oppression, thus turning a literary event into a political one. The Ten Nights became the first in a series of mass protest meetings that culminated in the Revolution of 1979.
In this project, we sought to estimate the impact of literature as an influential medium, the role of the literature in the reinforcement of public political opinion. Besides, we try to understand whether the timeless literature has the potential to influence a politically mobilized society? If yes, did the literature and intellectual circles, such as universities, writers’ hangouts, theological seminaries and libraries provide a proper ground for constructive dialogues rather than impulsive acts? History only carries what constitutes historicity and that is nature.  And in nature it is history that remains more than nature itself. “Natural History of Decay/Baraneh Emadian”

My experience of deterioration began when I was a child. That is the reason for representing those moments. Moments that may be repeated in other ways, such as in a work of art or in human relationships, in the form of a community, or even a dream or the thousands of other forms we deal with. Most of my biological experience was dominated by loneliness and coexistence with the home without the presence of humans or even animals; in fact, without the presence of “others”.  Only the walls and the rooms have shaped my mental images. Maybe everything was out of the room. This sentence has six words.
I believe that the form creates content. I abstract the movement and repetition through form.  It breaks the binary structure of the image and presents it with glitch effect. “Even insects express anger, terror, jealousy, and love by their stridulation.” Charles Darwin

Ideas have social implications when they are in active mode. And they influence a social change, they become values that are capable of provoking a powerful impetus, or as an ideological system beyond the various forms of action that the ideology assumes can be both transformative and be against it. Source of energy, like thesun, helps us move and continue living. In the darkness, the light guides us through the way. This video directs the mind of the viewer into an illuminated route by exerting stimulant forces.