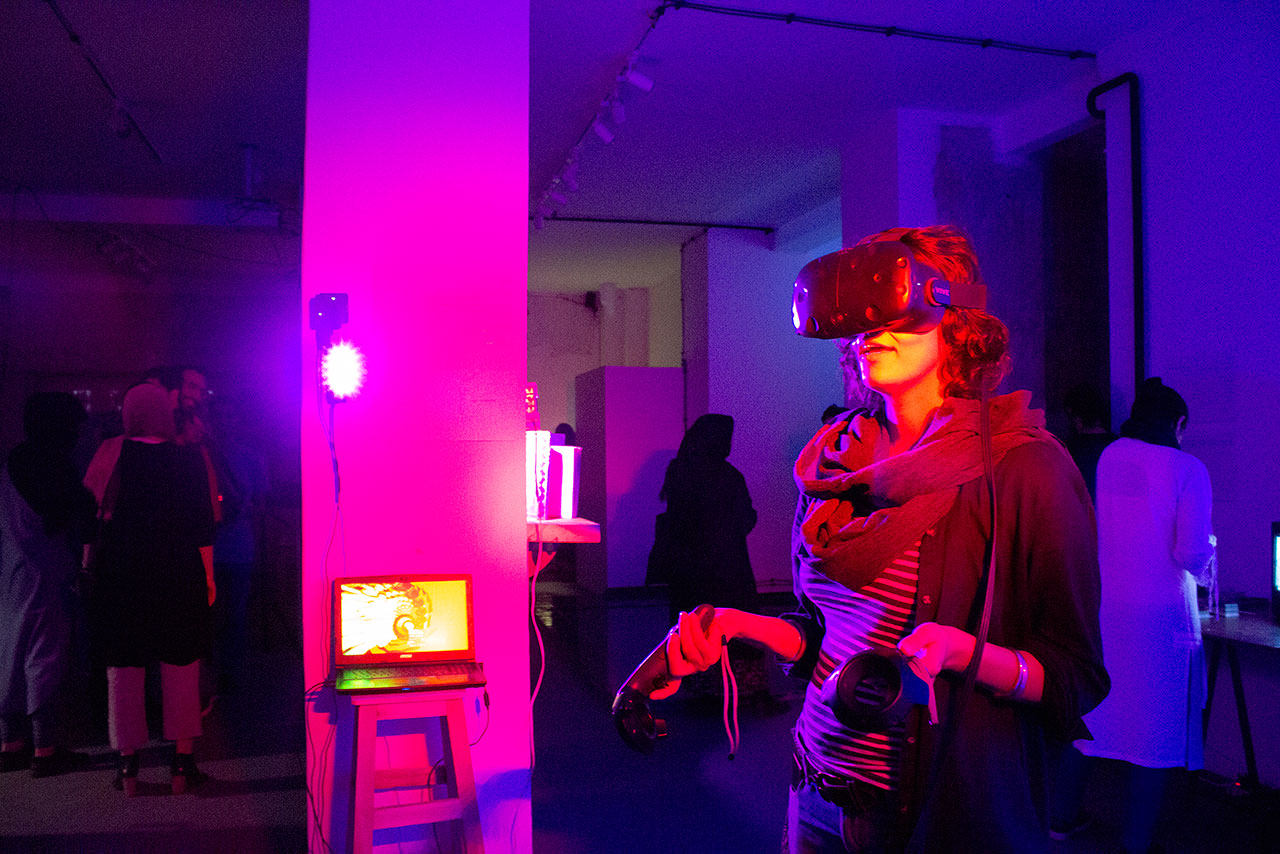 In 2017 I started Tey Al Tool interactive project, it’s my ongoing VR self-portrait By creating a virtual 3D world based on my physical everyday life as a media artist and my usual experiences with computer and digital softwares. I try to share this experience with the audience to teleport and discover it. This project is ongoing research and challenge for me to find digital aesthetic potentials in my daily physical life and bring them into my parallel virtual world using many individual and cultural values. In this project I uninterruptedly trying to understand and experience the meaning of characteristic creation as a media artist.

Using virtual reality medium to create a self-portrait, could offer many new properties for self-expression, in compare of traditional mediums, using a wide range of technologies like 3D design, graphics programming, real-time rendering, Shader programming, 3D scanning and etc could bring many new abilities for this expression, beside presenting a self-portrait to the audience and creating an artwork, it could be a new way for the artist to digging inside and find new aspects of his/her individuality. This ongoing self-portrait is a chance for me to experience myself in a virtual world parallel the physical one, which is totally created by myself.

Tey Al Tool is a similar name to Tey Al Arz which Is like folding the earth. it’s a kind of ability in Islamic mysticism and expresses the concept of teleport to another place in a moment.

One of the definitions of Tey al arz Is: “A type of karamat in which instead of moving toward a destination by taking a step forward, the earth turns toward the traverser rapidly, no matter how far the destination is.” Tey al arz is also mentioned in Qoran when “Solomon said to his own men: which of you can bring me the throne of Queen of Sheba, and one of them said: I will bring it before thou stand up.” And so he did.

The teleportation is the main navigation system in this project for discovering trough the scenes and worlds, where the audience could experience this ability in my virtual self-portrait worlds.“ 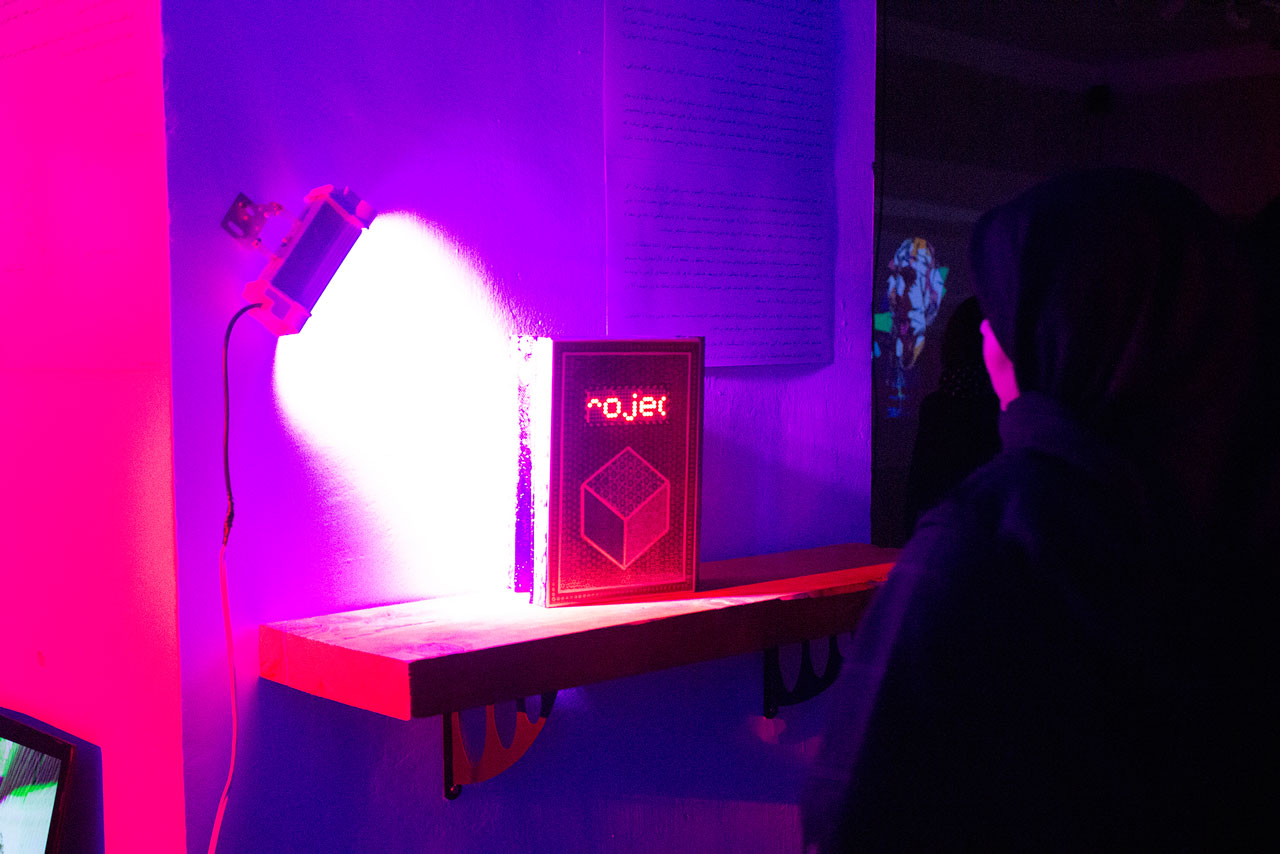 A fāl or Bibliomancy is the good or the bad, the profit or the loss whose occurrence is predicted by hearing a word or a voice, seeing the movement or the expression, opening or reading a book, or observing a specific motif or image.” Mohammad Vojdani

This project is about generating a virtual environment of a prediction using unlimited online data based on the Persian Mysticism and tradition into a VR artwork. As there are so many people who get matched results based on their niyats and there are many stories about the magic of Hafiz fāls in our history, maybe this online data can create a story and suggest a solution for whoever is taking a virtual Hafiz fāl.

Hafiz Fal “14th-century poet from Shiraz, Iran. who known as Tongue of Hidden because all the secrets inside his poems” is an old tradition of Iranian whenever someone has a question, face to a difficulty or a fork in the road.

There is an anecdote about the first Hafiz fāl ever taken. After Hafiz’s death, because the word ‘wine’ had been used a lot in his poems, some of the religious people refused to join his funeral. Therefore, Hafiz believers and fans decided to put all his poems into a jar (when his poems had not been bound yet and they were written on some separated papers) and ask a young child to pick up one of them so that they would act based on the selected poem. The picked poem was this,

” Neither Hafiz’s corpse nor his life negate,
With all his misdeeds, heavens for him wait. “ And eventually, everyboy joined his funeral with regards. Taking Hafiz fāls in scope had been wider and extended to Central Asian countries which still are speaking some Persian- the most important of which Tajikistan-, in our east, The Indian subcontinent and also Afghanistan and, on the other side, in our West, Asia Minor, and current Turkey, In the book named ‘Hafiz’s Wonderful fāls’, Baha-Al-Din Khoramshahi has collected more than 100 anecdotes about the fāls that have been matched and changed a way. It’s a small selection and a result of the writer’s researches whose most of are contemporary stories. Also, Hussein Kafavi (Ottoman scientist, judge and literary) has collected more than 140 stories about fāls and their wonders in Turkey in the 15th century. This book is written in Turkish and named ‘Raz Name’ which means “letter of Secret”, in which the writer has mentioned the importance of fāls at that time in Istanbul.

Fāls could be a mental connection between the people and the selected poem. This kind of connections that could be studied in parapsychology, something like Hypnosis and telepathy that most of the people already accept. In some theories it’s also like a dream (some dreams that show a small period of what will happen in the future. That’s something that has already happened to me many times- to have a dream and then in a near-future review the dream in real life). This event is also known as Déjà vu, what has been studied about in mental and medical fields such as neurology or genetics.

In the current digital era, visualized data could have a meaning of a real data to us, we trust the understanding of a 3D object in our screens as the real one in our real world, even if the 3D object is none-rendered, none-shared and low-polygon. There is a complicated question that if a VR artwork can really do magic. Some science fields like machine learning and artificial intelligence are trying to answer this question and get success in some steps, but this project is trying to answer this question by combining those technologies with some old Iranian traditions.